7.1.1. Summary of evidence and guidelines for the treatment of primary urethral carcinoma in males

In women with localised urethral carcinoma, to provide the highest chance of local cure, primary radical urethrectomy should include removal of all the peri-urethral tissue from the bulbocavernosus muscle bilaterally and distally, with a cylinder of all adjacent soft tissue up to the pubic symphysis and bladder neck. Bladder neck closure and appendicovesicostomy for primary distal urethral lesions has been shown to provide satisfactory functional results in women [38].

Previous series have reported outcomes in women with mainly distal urethral tumours undergoing primary treatment with urethra-sparing surgery with or without additional radiotherapy (RT) compared to primary urethrectomy, with the aim of maintaining integrity and function of the lower urinary tract [72,73]. In longer-term series with a median follow-up of 153–175 months, local recurrence rates in women undergoing partial urethrectomy with intra-operative frozen section analysis were 22–60%, and distal sleeve resection of > 2 cm resulted in secondary urinary incontinence in 42% of patients who subsequently required additional reconstructive surgery [72,73].

Ablative surgical techniques, i.e., transurethral resection (TUR) or laser, used for small distal urethral tumours, have also resulted in considerable local failure rates of 16%, with a CSS rate of 50%. This emphasises the critical role of local tumour control in women with distal urethral carcinoma to prevent local and systemic progression [72].

In women, RT was investigated in several older series with a medium follow up of 91–105 months [74]. With a median cumulative dose of 65 Gy (range 40–106 Gy), the 5-year local control rate was 64% and 7-year CSS was 49% [74]. Most local failures (95%) occurred within the first two years after primary treatment [74]. The extent of urethral tumour involvement was found to be the only parameter independently associated with local tumour control but the type of RT (EBRT vs. interstitial brachytherapy) was not [74]. In one study, the addition of brachytherapy to EBRT reduced the risk of local recurrence by a factor of 4.2 [75]. Of note, pelvic toxicity in those achieving local control was considerable (49%), including urethral stenosis, fistula, necrosis, cystitis and/or haemorrhage, with 30% of the reported complications graded as severe [74].

7.2.3. Summary of evidence and guidelines for the treatment of localised primary urethral carcinoma in females

7.3. Multimodal treatment in locally advanced urethral carcinoma in both males and females

Multimodal therapy in primary urethral carcinoma consists of definitive surgery plus chemotherapy with additional RT [76]. Multimodal therapy was often underutilised as shown by Cahn and colleagues (only 16%) in locally advanced disease notwithstanding promising results [76-79]. In a recent study monotherapy was associated with decreased local recurrence-free survival after adjusting for stage, histology, sex, and year of treatment (p = 0.017). Its use has decreased over time [80]. Treatment in academic centres was reported to result in higher utilisation of neoadjuvant- and multimodal treatment and improved OS in patients with locally advanced urothelial- and squamous cell primary urethral carcinoma [65].

7.3.3. Chemoradiotherapy in locally advanced squamous cell carcinoma of the urethra

The clinical feasibility of local RT with concurrent chemotherapy as an alternative to surgery in locally advanced SCC has been reported in several series. This approach offers a potential for genital preservation [82-86]. The largest, and recently updated, retrospective series reported outcomes in 25 patients with primary locally advanced SCC of the urethra treated with two cycles of 5-fluorouracil and mitomycin C with concurrent EBRT. A complete clinical response was observed in ~80% of patients. The 5-year OS and disease-specific survival was 52% and 68%, respectively. In this updated series, salvage surgery, initiated only in non-responders or in case of local failure, was not reported to be associated with improved survival [82].

A large retrospective cohort study in patients with locally advanced urethral carcinoma treated with adjuvant RT and surgery vs. surgery alone demonstrated that the addition of RT improved OS [87].

A multicentre study reported that patients who were treated with surgery as primary therapy and underwent surgery or RT-based salvage treatment for recurrent solitary or concomitant urethral disease, demonstrated similar survival rates compared to patients who never developed recurrence after primary treatment [66].

Nodal control in urethral carcinoma can be achieved either by regional LN dissection [38], RT [74] or chemotherapy [54]. Currently, there is still no clear evidence supporting prophylactic bilateral inguinal and/or pelvic LND in all patients with urethral carcinoma [56]. However, in patients with clinically enlarged inguinal/pelvic LNs or invasive tumours, regional LND should be considered as initial treatment since cure might still be achievable with limited disease [38]. It was recently shown that in patients with invasive urethral SCC and cN1-2 disease, inguinal LND conferred an OS benefit [56].

7.3.6. Summary of evidence and guidelines for multimodal treatment in advanced urethral carcinoma in both males and females

7.4. Treatment of urothelial carcinoma of the prostate

Local conservative treatment with extensive TUR and subsequent BCG instillation is effective in patients with Ta or Tis prostatic urethral carcinoma [88]. Likewise, patients undergoing TUR of the prostate prior to BCG experience improved complete response rates compared with those who do not [89]. Risk of understaging local extension of prostatic urethral cancer at TUR is high in patients with ductal or stromal involvement [90]. In smaller series, response rates to BCG in patients with prostatic duct involvement have been reported to vary between 57% and 75% [88,91]. Some earlier series have reported superior oncological results for the initial use of radical cystoprostatectomy as a primary treatment option in patients with ductal involvement [92,93]. In 24 patients with prostatic stromal invasion treated with radical cystoprostatectomy, a LN mapping study found that twelve patients had positive LNs, with an increased proportion located above the iliac bifurcation [94].

7.4.1. Summary of evidence and guidelines for the treatment of urothelial carcinoma of the prostate

There is no data addressing management of metastatic disease in primary urethral carcinoma patients. Systemic therapy in metastatic disease should be selected based on the histology of the tumour. The EAU Guidelines on Muscle-invasive and Metastatic Bladder Cancer can be followed if UC is the predominant histology [2]. Even though urethral carcinoma patients have been included in large clinical trials on immunotherapy, so far, in terms of response rates, no subgroup analyses are available [95].

In addition, there is an urgent clinical need to better address the role of local palliative treatment strategies in primary urethral carcinoma including surgery, which has shown to impact positively on QoL aspects in selected patients with advanced genital cancers [96]. 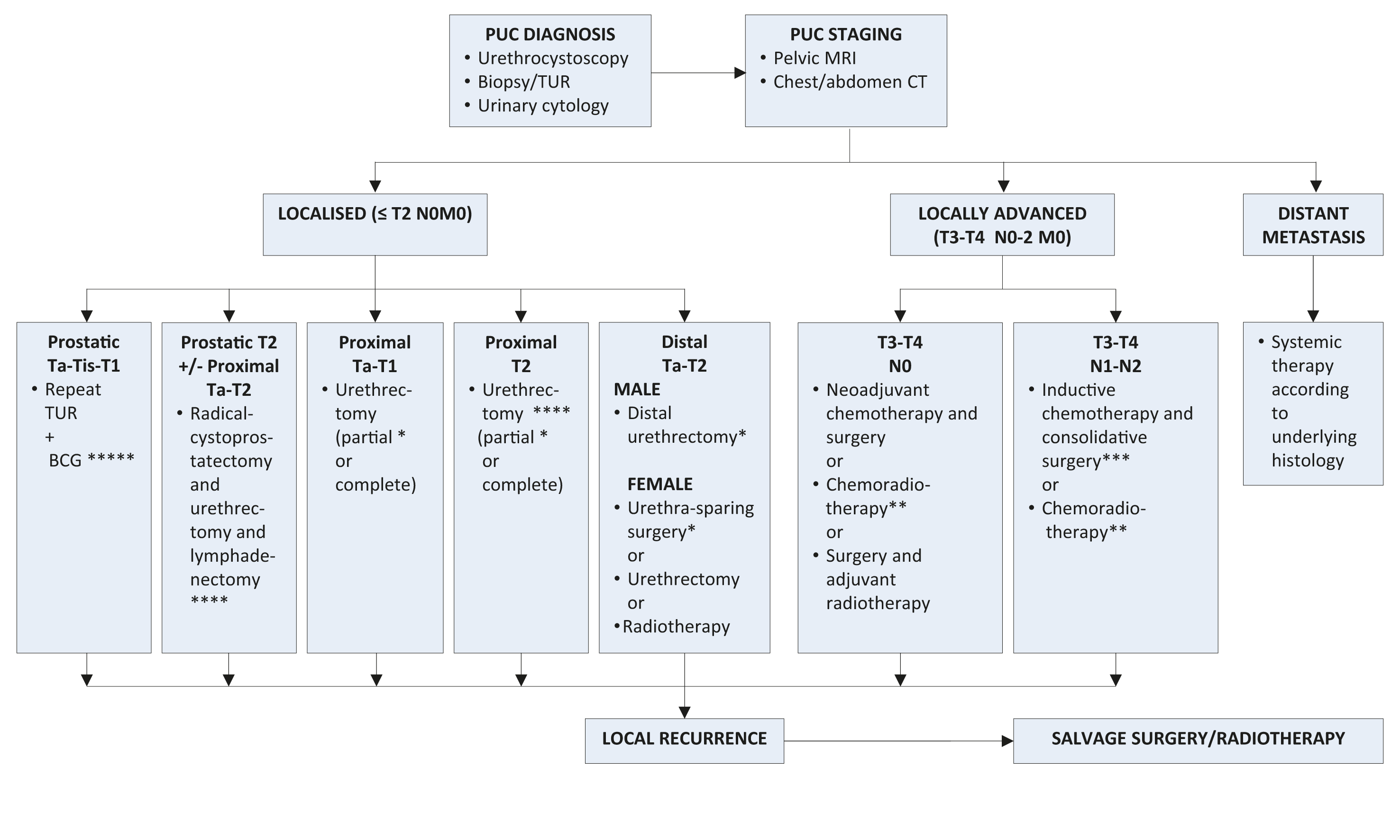