Several aetiological factors are considered to contribute to the pathophysiology of LSD. Levine proposed three components of sexual desire as drive (biological), motivation (psychological) and wish (cultural) [982]. However, it is believed that both in the surveys and clinical practice those three components are usually found interwoven [983].

Testosterone seems to be essential for a man’s sexual desire; however, sexual desire does not directly relate to the circulating level of testosterone, especially in older men [991]. The biological and psychological components that take place in the pathophysiology of LSD are shown in Table 24 [983,992]. In addition to these factors, there is some speculation about the role of thyroid and oxytocin hormones [720,993].

In an international survey aimed at estimating the prevalence and correlates of sexual problems in 13,882 women and 13,618 men from 29 countries (Global Study of Sexual Attitudes and Behaviours), risk factors for male LSD were age 60-69 and 70-80 years, poor overall health, vascular diseases, being a current smoker, belief that ageing reduces sex, divorce in the past 3 years, financial problems in the last 3 years, major depression, being worried about the future of a relationship and less than one sexual relation in a week [209]. In a recent study that determined the factors associated with LSD in a large sample of middle-aged German men, PE, ED, and lower urinary tract symptoms were associated with LSD [981]. In contrast, men having more than two children, higher frequency of solo-masturbation, perceived importance of sexuality, and higher sexual self-esteem were less likely to have LSD [981].

Sexual Desire Inventory (SDI) evaluates different components influencing the development and expression of sexual desire [994]. This self-administered questionnaire consists of 14 questions that weigh the strength, frequency, and significance of an individual’s desire for sexual activity with others and by themselves. The SDI suggests that desire can be split into two categories: dyadic and solitary desire. While dyadic desire refers to “interest in or a wish to engage in sexual activity with another person and desire for sharing and intimacy with another”, solitary desire refers to “an interest in engaging in sexual behaviour by oneself, and may involve a wish to refrain from intimacy and sharing with others” [994].

Similar to other forms of sexual dysfunctions, a thorough medical and sexual history must be obtained from men who complain of LSD. The depressive symptoms of the patients must be assessed [995] and relationship problems (e.g., conflict with the sexual partner) must be questioned. In the presence of accompanying symptoms suggestive of endocrinological problems, circulating total testosterone [996], prolactin [997] and thyroid hormones [720] levels can be evaluated.

Treatment of LSD should be tailored according to the underlying aetiology.

Data on efficacy of psychological interventions for LSD are scarce. Accordingly, recommendations must be interpreted with caution. Psychological interventions with a focus on cognitive and behavioural strategies may be beneficial for LSD in men [460,998] (Figure 10). Mindfulness treatments may be a strong candidate, as well [998]. Since both members of a couple may experience age-related changes concurrently and interdependently, it could be helpful to address the sexual health needs of the ageing couple (including LSD) as a whole rather than treating the individual patient [999]. Indeed, psychologists are putting more emphasis on the concept of sexual desire discrepancy. Sexual desire discrepancy is often found in couples or partners, and mirror a natural part of life and partners’ dynamics. Clinical approaches based on this lens are less stigmatising as they consider the normal variations in sexual desire that occur throughout the lifespan. This intervention option targets couples distressed by sexual desire discrepancies rather than a single individual targeted as the one presenting low sexual desire [990]. 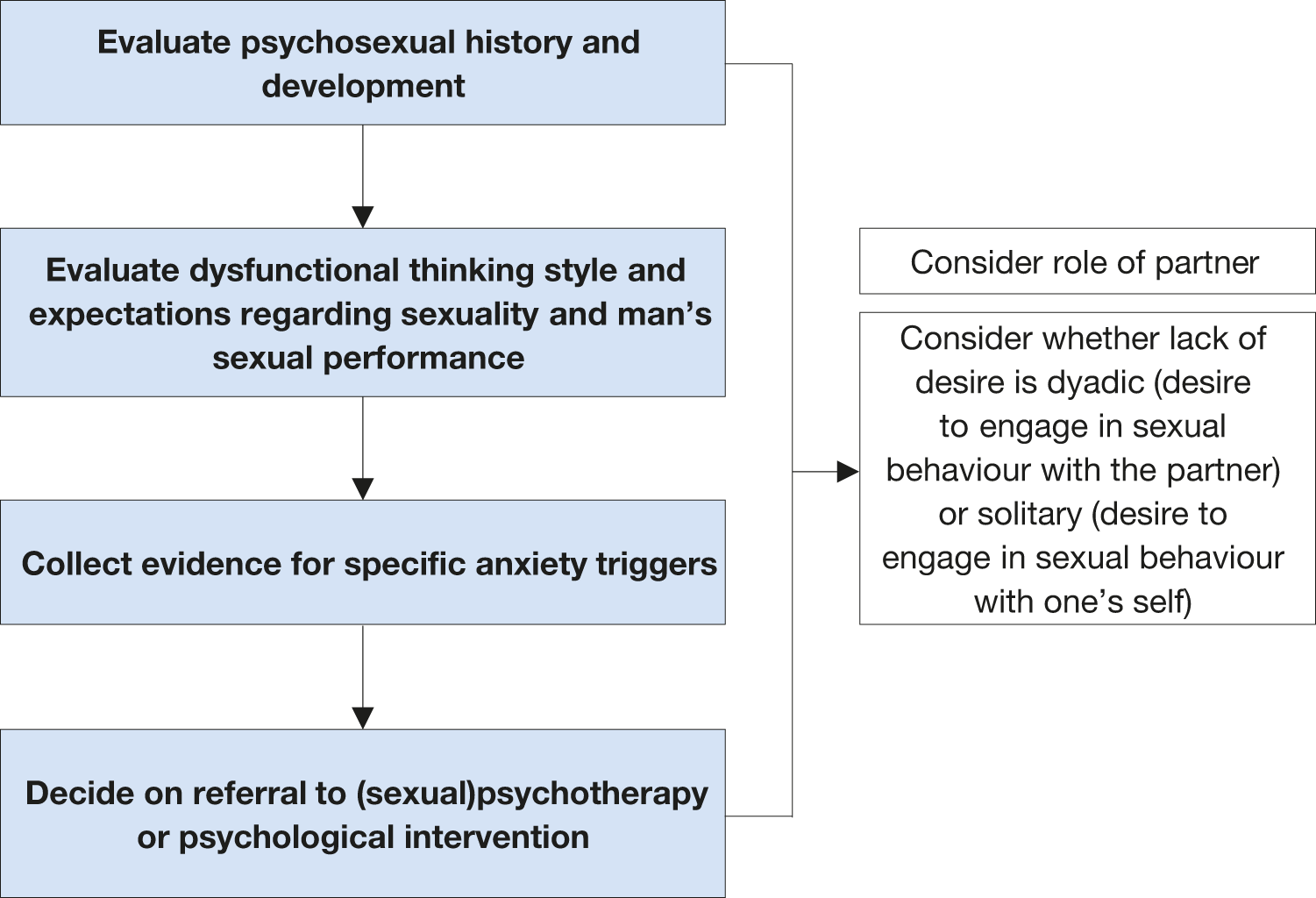 Low sexual desire secondary to low testosterone levels can be treated with different formulations of testosterone. The favourable effect of testosterone therapy on sexual motivation and the presence of sexual thoughts was shown in a meta-analysis [996]. The aim of treatment should be to reach the physiological range of testosterone (see Section 3.5).

Hyperprolactinaemia can also cause LSD and one of the most relevant aetiological factors is prolactin-secreting pituitary adenomas. These adenomas can be easily diagnosed with MRI of the pituitary gland and can be treated with dopamine agonist agents [1000]. The other accompanying endocrine disorders, such as hypothyroidism, hyperthyroidism and diabetes, should be treated accordingly.

7.5. Recommendations for the treatment of low sexual desire